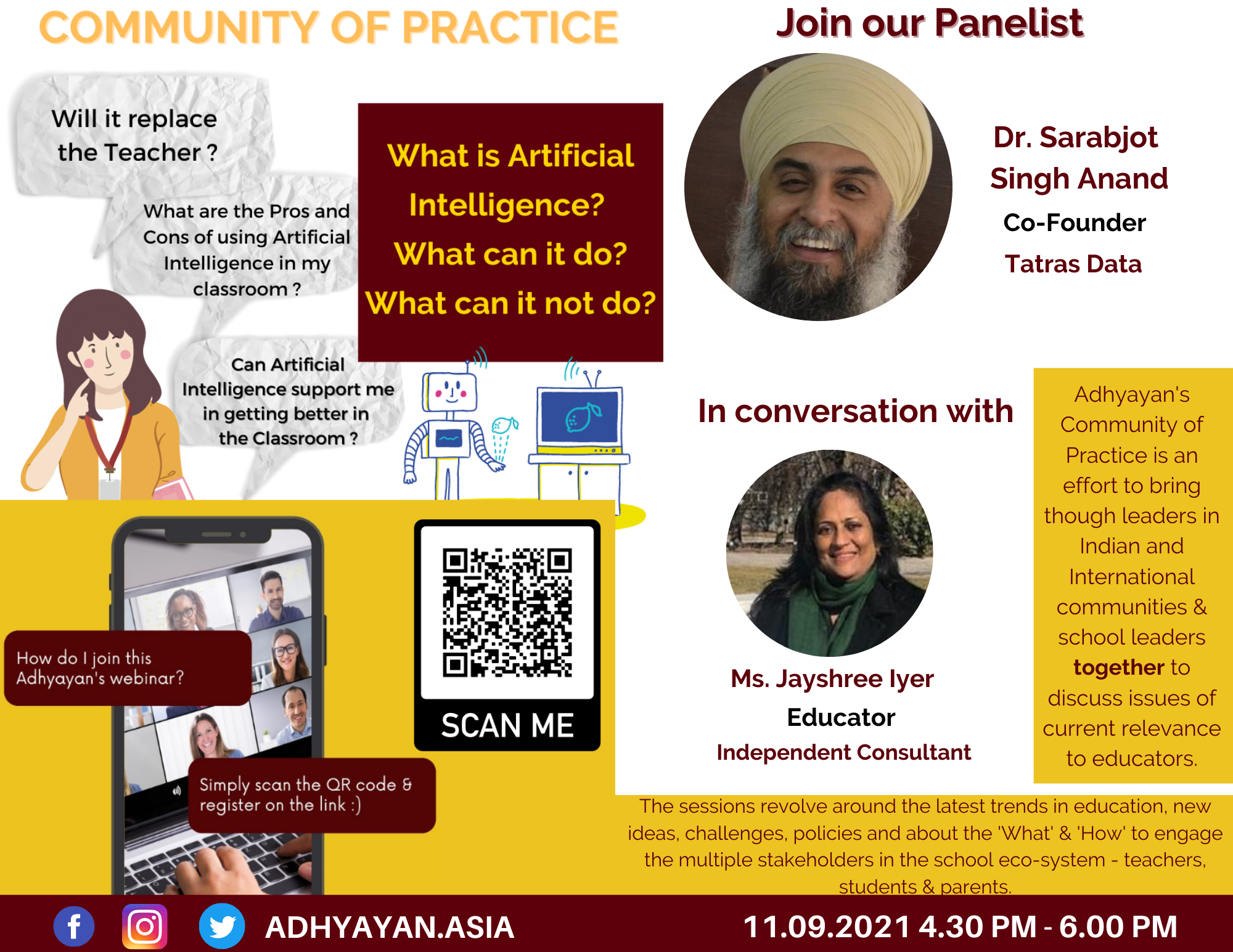 Artificial intelligence[AI] at the school level is quite important as per NEP2020 and it is widely used in daily life like the Aarogya Setu app, Alexa, face recognition as phone passwords etc. As Adhyayan addresses relevant education-related issues that may interest educators, today’s topic was also chosen to bring information and some food for thought for the intellectual minds who chose to attend such meaningful discourses on Saturday afternoons.

Introducing the guest, Jayshree informed all present that Dr Sarabjot Singh Anand has been involved in the field of machine learning since early 1990, developing algorithms, applying them to the real-world problem while working on a host of data types, has published over 90 academic papers on machine learning in the capacity of being an academic and entrepreneur. He was an Associate Professor at the University of Warwick in the United Kingdom and built algorithms to develop solutions in diverse areas. He came back to India in 2012 to train engineering students in machine learning and to work on social problems in education, farming-governance and Healthcare. He also designed and crafted the software used by Adhyayan for school reviews.

To set the ball rolling, Jayshree asked questions such as, “What is  artificial intelligence and why has it become so important today?” Sarabhjot Singh took us back in history how AI came into being as  Alan Turing and other mathematicians tried modelling the universe using probability theory, developed machines that used neural networks based on the functioning of the human brain and so on. He elaborated on how the same machines are being used by Netflix choosing the programs to be seen by one individual subscriber based upon their viewing history, computer listening to and talking in the human voice,  looking at the X-ray images and finding the medical issues. But this powerful technology which is working successfully now because of the availability of a large amount of data sources from channels like Facebook and Instagram must follow ethics about ownership of data and also how to use it.

Answering another question on the use of AI in education, he said that it has enabled us to create a different learning path for every child which may not have happened in a physical classroom. He explained it at length taking examples from his own students in Mohali where they could not just get answers to the question asked by them but also were directed to questions and clips of the lecture videos that dealt with the topic of the question asked. Another use that he stressed was the advantage to get good quality translations of languages more so in the last few years.

In the same vein, he talked about the importance of data collection giving the analogy of human sense organs to the sensors and the camera of the computer recording the observations from its surroundings. This collection of data later helps them to build complex associations [alogrithms]. More the data,  better would be the algorithms and the more useful will it be to analyse and infer the data that would flow in later to provide effective solutions to problems. Therefore he stressed investing in developing data sets to enable their usages in Indian contexts of education, language and other sectors just the way developed countries have done.

Jayshree drew attention to the questions asked by the audience like how it can be used for teaching subjects like Maths. He talked about domain models as they were developed by big universities like Carnegie Mellon; the adaptive learning systems that make the experience individualised for each student based on his individual way and pace of learning. This will be especially helpful in the Indian scenario to personalize the experience of each child in spite of their numbers. He cautioned against using an AI system based on databases of other countries as they are not meant for Indians and hence may be biased. Even for educational uses, the solutions would be meaningful only when it is based on data collected from India. The assessment, evaluation and other routine jobs are very well made convenient by using AI.

While talking about the limitations of AI, he informed that it can’t use common sense, causations of an event and unsupervised learning from data. It is the human beings that need to teach a machine how to learn and feed unbiased relevant data. Machines are just a bank of answers for all possible questions.

To look at  AI as a career and the need to have coding classes, he agreed that being central to every career, the sooner the students get training, the better it would be for them; but only when they receive quality teaching for these courses. It can only be done by instilling a passion for AI and allowing them to choose their own project. Using technology to identify a problem and finding a solution by collecting the data is what he wants to do in India. He exemplified how sustainable development goals can be met by encouraging the younger generation in this field. At the same time, it will also encourage the students to develop critical thinking and analytical skills as mentioned in NEP 2020.

Jayshree held a small discussion among the audience at the end and summed up the session by stating the potential uses of  AI  though it would take a lot of curation of data going ahead. In subject-specific software, a lot of work is still required. Artificial intelligence definitely can change the education world where every child may blossom if we can use it effectively to personalize learning!

The Game of Bridge Programme

Bridge is a mind sport that stimulates both the left and right sides of the brain. Playing bridge improves your skills in concentration, communication, logic, imagination, lateral thinking, mathematics, memory, patience, multitasking, visualization, and psychology.   Learning Bridge is also linked with improved academic performance. There was one study done in America which links increased test scores in children with playing Bridge.

Here's the link to the report http://web2.acbl.org/documentLibrary/teachers/statisticallyspeaking.pdf

A study released by the College of Medicine of Yeshiva University found "Playing chess, bridge or a musical instrument significantly lowers the risk of developing Alzheimer’s disease or other forms of dementia, according to the most comprehensive study to examine the benefits of challenging intellectual activity among the elderly."